Grey’s Anatomy an American television medical drama series produced by the American Broadcasting Corporation, which premiered on ABC on March 27, 2005, after the cessation of half the season of the series Desperate Housewives, and it was shown in only 9 episodes.

It is considered one of the most watched series in the United States by ABC and has won many awards.

The series was shown all over the world and was a resounding success, especially after the successive seasons

The popular multi-season TV show, It gets a online Quiz Which Badass Lady From “Grey’s Anatomy” Are You? 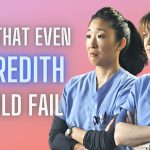