Stranger Things Season 1 Quiz
The events of Stranger Things take place in the fictional city of Hawkins, Indiana, in November 1983. and the story begins with the disappearance of the child Will Bayer in mysterious circumstances on his way back home while riding his bike after he finished visiting his friends Mike, Dustin, and Lucas. But the surprise is that he does not return to his house and his bike is found the next day by the police without any trace of Will. 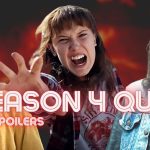