Stranger Things Netflix is an American series that is classified as a science fiction, thriller, drama, and horror series. In addition to being suitable for all age groups as it rated age 14+ by Common Sense Media. Three seasons have been released out of it yet, and part 4 is confirmed. But it is likely to continue to its fifth season.

The first season of Stranger Things Netflix was shown in July 2016 on the global Netflix network. With 8 episodes for each of the first and third season and 9 episodes for the second season.

The Stranger Things events take place in the fictional city Hawkins, Indiana, in the United States of America in November 1983. The story begins with the mysterious disappearance of a child named Will Byers on the way home when he rides his bike after he finishes visiting his three friends. But the surprise is that he did not return to his home and his bike was found the next day by the police without any trace of him.

After Will’s disappearance, his three friends Mike, Dustin, and Lucas meet a weirdo girl with extraordinary abilities. Like teleportation called Eleven. And they have a feeling that she has something to do with Will’s disappearance and then they hide her in Mike Wheeler’s house.

You can watch strange things on Netflix.

In this Test, you will find out if your personality is like Eleven or Max. 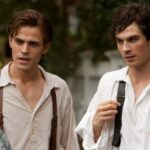